It’s always discomfiting to encounter unusual animals, especially when they carry a distinctly prehistoric look. If we could really see their primal origins in the flesh, we’d probably come unhinged!  Travel back with me 130 million years ago to a time when South America was cut adrift from what is now the west coast of Africa.  This giant island raft was isolated from the rest of the world as were the animals that lived there. As you can imagine, strange things came to pass in the misty hillsides and rain forests as bestial breath boiled off into the dawn. This was the genesis of giant ground sloths, saber-toothed cats and a montage of other unique creatures. This is where we meet Doedicurus, a lumbering mammal about the size of a modern automobile, totally encased in body armor. Doedicurus was a gigantic herbivore who carried a thick war- club of a tail, crowned with spikes . . . his not-so-hidden persuader. Fast-forward to today. North and South America are attached and the land bridge feeds directly into the state of Texas. Doedicurus is believed the prehistoric ancestor of the armadillo—and today the armadillo is the official “small mammal of Texas.” It’s no wonder, then, that neighbors to our north are astonished when they see their first armadillo—they consider it an “exotic” animal.  In some respects, I suppose it is.

Overall, there are some 20 species of armadillos in the modern world and all but one live in South and Latin America. The diversity among them is extreme, ranging from the tiny 6-inch-long pink fairy armadillo to the 5-foot-long endangered giant 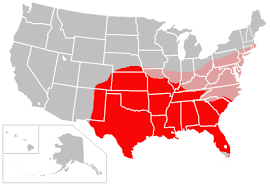 armadillo. All species but one—the nine-banded armadillo (Dasypus novemcinctus)—suffer from declining populations. Turns out, the nine-banded armadillo (AKA long-nosed armadillo) is the only variety to cross over into North America and flourish here.  It was first recorded in Texas in 1849 but now it’s as far north as Nebraska and east of the Mississippi, all the way to Tennessee and North Carolina.  This may be about warming of the planet, because armadillos can’t stand cold.  They have a low metabolic rate and no fat stores.

Armadillo is a Spanish word meaning “little armored one.” Most of their body is covered in boney plates for protection—there’s nothing else quite like them in the world. As mammals, you may wonder where’s the hair . . . it’s on their tender underbelly (curb feelers?).  Nine-banded armadillos (hereafter, “armadillos”) are a bit off-putting at first glance.  They look like a ground-hugging armored car with thick claws for digging, pointy snouts for rooting, strong rear legs, trailing a spiral, rat-like trail.  Their diet is high protein:  grubs, worms, termites, ants, beetles and other insects, some forms of vegetation and even the maggots found in dead animals (Yum).  Found in all but the western Trans-Pecos part of Texas, they go for brush, woods, scrub or grasslands—their most important prerequisite for habitat is easy-digging earth. Armadillos are grand architects. Their burrows (where they exist) can be quite complex, stretching some 20 ft. long, 5 ft. deep and peppered with multiple points of entry and exit. Otherwise they shelter under large root systems, boulders, hollow logs or whatever nature provides.  Generally solitary, in cold weather they’ve been known to sleep together underground for warmth.  In any case, they sleep most of the day, emerging at dusk to forage and hunt.  What they lack in eyesight or hearing they make up for with an acute sense of smell—their primary method of finding food.

Armadillos have quite a repertoire of defensive measures when threatened. Quickly running for cover (they can boogie) is first choice because once inside their burrow they’re next to impossible to remove or dislodge. When surprised, they leap straight up in the air—like a Jack-in-the-Box.  Very unusual.  If caught in the open, they draw in their feet to present a solid armored lump (Dasypus novemcinctus does NOT roll itself into a ball). Sometimes they even “play dead.” Failing all else, they scratch and kick violently with their powerful claws. to-say, I surprised him. With apoplectic fury, kicking and flailing, he instantly corkscrewed himself out of my grasp, fell to the ground and exploded into the bristling darkness. Holding on to that animal was like trying to put panty hose on a tomcat!

Armadillos belong to the superorder Xenarthra (literally, “strange joints”), along with sloths and anteaters. While they earned this name for having extra joints in their backbone, these creatures have plenty of other strange features.   Take, for example, their abilities to negotiate small bodies of water.  Depending on depth and current, to cross a stream they have two choices, both of which take gobs of courage in my book.  First, they can semi-inflate themselves by ingesting large quantities of air and float along like a piece of driftwood, or . . . crossover by walking on the bottom while holding their breath.  You won’t find either of these in the Boy Scout Handbook!

The armadillo life cycle is also remarkable. Gestation lasts 4 months, yet the total process takes twice that long.  That’s because it takes up to 4 months for a fertilized egg to become implanted . . . but wait, there’s more!  Almost always armadillos have 4 identical “pups” formed from the same egg. They even share the same placenta while in the womb. This is the only reliable occurrence of polyembryony in the class Mammalia, and exists only in the genus Dasypus, and not in all armadillos. Because they are always genetically identical, the group of four young provides a good subject for scientific, behavioral, or medical tests that need consistent biological and genetic makeup in the test subjects. The pups are born with leathery skin, are walking within hours, and stay with their mother anywhere from 6-12 months—dad is a sperm donor only, no parenting skills whatsoever.

Armadillos are curious on another front as well. They serve as a rare research opportunity for the study of leprosy. Armadillos are among only a few known species that can contract the disease systematically.  It’s believed that armadillos picked up the disease from European settlers who brought it with them from the Old World.  The leprosy bacterium is difficult to culture and armadillos, due to a relatively low body temperature, prove near ideal hosts.

So is the disease common in armadillos? No; it occurs naturally only occasionally these days.  Can you catch leprosy from an armadillo?  The short answer is yes, but it’s difficult.  Disease transmission comes about in two ways:  1.) excessive handling of the mammal, and 2.) eating armadillo meat.  While you may not think of armadillo as haute cuisine, making a meal of the animal is actually still practiced in some parts of Mexico and South America.  It also used to be on the menu in rural Texas when times were tough during the depression of the 1930’s. In fact, armadillo meat was satirically referred to then as “possum on the half-shell.” Armadillo is said to taste somewhat like pork.  Yeah, right.  For any gastronomes among you, find recipes at https://armadillo-online.org/food.html .  Bon Appetite!

Whether you see armadillos as cute and cuddly or disease-ridden pests which leave tell-tale divots in your lawn, they are a strong reminder that evolution is a continuing process. Their world may not have changed that much from millions of years ago, even though ours has. This may explain their odd habits and behavior as well as why they’re so frequently seen along the highway as roadkill. Today armadillos remain—minus the spiked tail—relatively unaltered from their early ancestors. And that’s probably why it requires a knuckle-dragging mouth breather to try to pick one up!